Just the latest  earphone that passed  through my hands  recently! 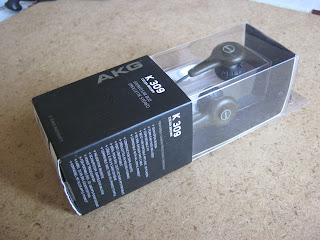 under a nice packing with easy to open box
a better picture of the sealed   earphones : 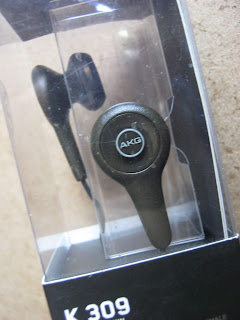 quite different design from  most earphones. huh ? 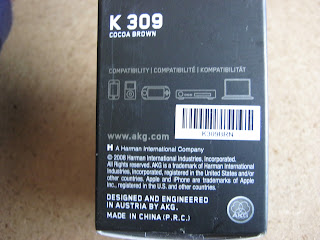 and here another closeup of the  earphones . it has the sense of  heavy  earphones with metallic laser punched speaker 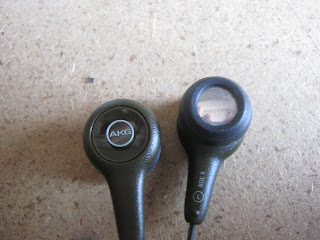 And here are  the results of some experiments : 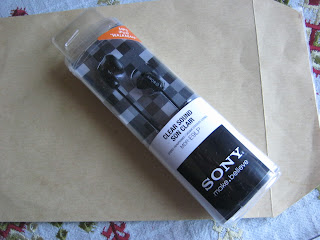 A very simple and fast  report for  earphones just passed a from my hands and   returned to the peson who bought it !

As you will see  these earphones are very similar to  mine MDR E755 earhpones   tetsted  some time ago http://zlgr.multiply.com/reviews/item/170  There are some major  dissimilarities with  these mostly in the box design as it reminds another model  tested more earlier .
Now more particularly  in the earphones again . 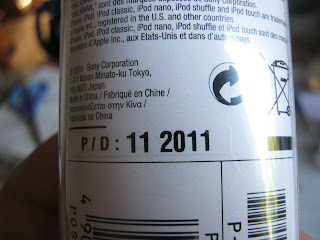 As in this picture , the model has been produced  Nov last year 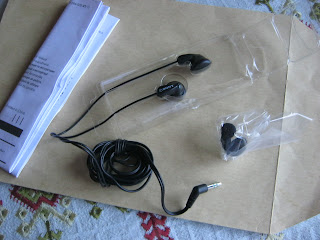 Dismantling he tube , there are several documents in many languages , togrtrher with a set of 'sponges' (as shown in the righth up ) But they are made very difficult  to be fit in the ears 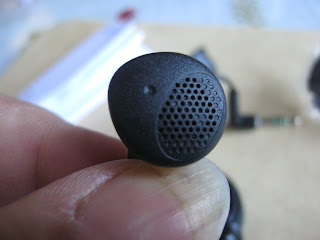 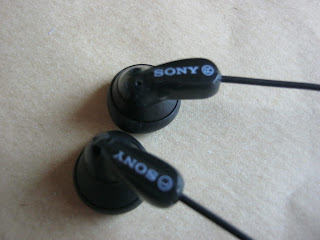 But the base is slightly diferent !


Some simple test and comparison with E755:

Sound is quite good and clear .
But comparing to E755  seems  to have no bass , over better say lacks the 'loudness' E755  offers!
making test  with E755 in A/B  parealell mode  shown the basses to be in the side to 755 while all other sounds to be in the middle .That translates  into:  same  audio level with 755 same  trebles but lacking basses !
'

Here something very different from all remain articles !

Have you ever  thought  on crazy tech ideas  , mostly science fiction with products that cant be ever made? (who knows some o them later can be made! )

Being a fan of high technology frm my young times  I hve devised several interesting ideas , some of then have already be made several others not ! I summarize some  of them below .
Also please  feel free  to post in comments  and ideas that  have passed though your mind !


At first are the ideas  already made
1.a very long play audio tape recorder  .(idea of 80s )
A  standard cassette recorder to record  at least 2 times the  standard cassette time , so a 1 hr cassette could be recorded /played to 3-4 hours .
As it happens with the  VCRs and the journalist recorders . Very good for recording from shortwave or very lengthy discussions / seminars .
As far as I know , on late 70s or early 80s  several commercial , possibly tinkered (=hacked )  cassette recorders, were sold in USA , using a variable resistor  to slow down the speed  motor with up to 3 times the standard time


2. a world radio with  built in mp3 recorder (an idea  on 2000 ).
Very easy with the today’s technology . Only one model has been  found from China but  operation is very complicated …(the start idea was with the Degen 1126 with 4 GB )

There were also several radio  tech ideas , but I will not post them!

Here is an idea  partially feasible :

3. Post Card sized  movie player(idea around  90 ).
A standard post/photo card  (10x15 cm or 13x18 cm and same thickness )    with touch screen for standard VCR /DVD features (palyback , FF RW ) Sounds to pretty good?
Well as far as I know OLEDs displays comply with the dimensions , though I wonder if they can operate in touch screen

Under this category  we can see today the following gadgets : e reader, IPOD , IPAD
Now  I go into the real science fiction ideas , I doubt  if  one of them can be made in reality !!

4. Full entertainment neural ‘wrist watches’. (ard 2002 ). The idea  is a little complex: Imagine you are  in a place that you do not want to  show that you are listening to the  music, i.e. without earphone .Your ‘wrist watch’ by some way, supposedly  tune into the body’s nerve syetem and offers you music and video and very good quality indirectly into your brain

I  hope you understand what I mean  with this …..

And here several other ideas in just headlines  - no analysis needed …..
6  a kind of  ‘laser’  type  beams’  producing  sound . two beams that in their joint produce audio
7. thumb communication with computer  , instead  of using keyboard. Just think o thumb to convey your thoughts directly to the computer and the program to trranscibe them
8. open air 3D computer display  and /or 3D video (without any display but in contrast  to the ‘Starwars movie idea’  the picture could be at least  1 m3  and with vivid or real colour , for the video  case  )


Have you ever thought any  ideas  less or more extreme  than this? If yes  please write them below  .

Just notice:
Arthur Clark  devised the idea  for satellites  on 1940+ using the  geostationary orbit . From 80s and then the s
A Greek monk Kosmas Aitolian on 1800 has just devised  two big ideas of 1900 : the airplane (named them as metallic birds )and trhe television (a big eye  with horns on the roof over the houses ) Nobody could understand that time  what he meant ….. K

Keep yourself  tuned in for  my next posting will be even more extreme than this  and can  sound quite insane and surely 1000%  unfeasible . I will write this because this could really  have many applications
Αναρτήθηκε από Zach Liang στις 6:03 π.μ. Δεν υπάρχουν σχόλια:

And here is the most insane  idea  from me  originally thought on  mid  of 80s . Several might find this crazy  but I just  put it here  as a reference .

A 4D  monitor !!
Imagine a  monitor  that can  look at real time into any place on the planet at any given angle .
This  is the main idea . Now I  expand this idea  even more in progressive steps  :
0.point  to the requested coordinates and hight
1.Looking it at different angles at horizontal or vertical level
2.Zooming un-zooming on the referred point
3.Going into  time (time backwards )
4.Do it ‘open window’  : interactivity with the  reference point /object
5.Do a object  search  mode : this is my original thought  for imagining  this whole  idea (googler). A by   “fast forward”  by time,  operation that works as a search function on objects  by sticking /referring to them:  You ve lost something and you have to find it out. Just look at the time  you think you lost it and this ‘monitor’  can follow your subject  so you will find it ‘now’
For me  this idea can have  too many applications as for example for the real time function  :  a dentist can make his surgery  using also the option 1 and 2 and 4   without  annoying his patients mouth to open widely , checking your store without cameras ,remote operating with dangerous  cases etc etc   (just the moral ways …), journalist remotely reporting without being target of terrorists.
For open window : It is like you open a window in you house . You have the access  to other  part of the screen/display .One of my ideas was to use it for a remote antenna  reception , by just  passing the wire  from this ‘frame’ for listening  say  the FM band of New Delhi or Tokyo, the monitor targeting the respective remote area of your interest !!
A real solution for today  is  radio wise to the  ‘global tuners .org ’ ***for  distant shortwave radio listening  via  dedicated  radio receivers  or direct online listening with the preferred  station .However   as  I have  interest  with the RTM  network  for listening to Malaysian music , most RTM stations  change their IP  frequently or go off, I again find this scifi idea quite ‘practical’ (just in theory ! )   But I have found that many other national or international radio   stations to change frequently  their IP addresses , for  their  own reasons .
ADD  : to add to the above list of global tuners , there are a few more systems on 2020 that can do this job: kiwiSDR  and remote systems for Perseus and other SDR systems . i tested with SDRConsole and SDR Sharp but i cant say i m quite impressed . these connections are quite slow and many times you cant connect to the system yu want

Unfortunately not all regions are serviced with remote systems As for example Africa only two SDRs are available The same happens in the SEA countries while CHIna uses around 10 of them and mostly in its east part ... What about the remote places in the middle of Asia?

In the contrast most of the systems are flooded in the W Europe Sometimes i feel that if this space gate could be thr best solution even in  pre mid  21th century to check older time transmissions  !