Long ago my very fist mp3 player a local muvi 18 has been dreaded after its system deleted from unknown reason  many files in its ram of just 2 GB and put a long part of junk files in its main directory together wit thousands of folders and zero sized files . There were only a few ,around 120 fiels from the 2000 included


This is the reason two years ago I bought one new model from eBay Ruizu X02 that was receivd in around 2 months from a company of unknown origin possibly Thailand of Laos  as oi could understand from the text included in the mini parcel.


Nearly a few days after I made a short folder in it experimented with an excellent conversion program called Xrecode. This is a shell program that uses graphical interface for more than 25 codecs , with MP3 WMA OGG FLAC APE DTS TAC M4A AAC  MP2 AC3 to name a few but also adds several useful plugins as  normalization merge-cue tempo fade silence removing metadata and much more. I always use it for more than 4 years. The folder I made contains all the refered formats and bit compression up tp 8 in wma and 16 in mp3 for investigation and later reviewing in my posts. The original file is a white noise of 1 minute


I m stopping this discussion as it will go to nowhere I think this info is quite important to disclose which ‘modes’ are ‘hidden’ from the main list  Simple playback of these 16 files shown that  the Ruizu X02 (spelled Zuicu) supported mp3 flac ape wma wav ogg and m4a but aac was heard in only one channel and mp2 was played in double speed with a weird audio.


The Ruizu seems to be from the same manufacturer of MUvi 18 and my old wife’s Muvi 24 as it uses nearly the  same screen format and playback.

It worked very well for around 2 years . I used cable form another supplier to make music updates tat worked well for many times but after April this year the connection  was quite loose so that he player was disconnected from the mini PC for unknown reasons . I also tried a few other cables which shown nearly the same problem.I made a few tries  in my older PC with still the same problem. After that I fond that the ruizu instead of playing ony shown the startup picture and then made continuous restarts as like the problem was from its battery as happened with a Creative Zen many years ago

Fortunately after giving that to a PC technician using a tiger cotton dressed cable the player was identified and then we did a total transfer of all its contents a 10 GB material . it was a 45 minutes transfer . the next day I left the player on for all time , recharged it in full but the problem remained . It was suerly a different problem from inside . Possibly the many on offs wit the cables affected the RAM’s   startup programs


After that I found a company from the English amazon from Evo Digitals [ZL1] to replace it . it was received on time after 21 days intead of the common of 14 due to corona virus and tested immediately . The fun with this case was with its packing : Just a small sachet with cable ,earphones the player and its instruction guide in a folded document of  15 x3 cm  in a foamed envelope . In contrast the older player was inside a mini box a I smaller than a 3” smartphone with the same accessories.


Discussion with my wife and my 12 aged daughter they also show an interest in this player. I was checking in several pages where there were a few colors etc but for unknown reason i dint  bookmarked them into the basket . checking ocne again I found a very similar to that with rear speakers and  made the order immediately with two pieces


It was received in nealy the same manner in 21 days . two days before I was recivd a message from the parcel company for the delivery on the nexr day in a post office around 5 km far  I just asked them to divert the delivery to our local post office.There is really a pack for each player togetehr with the standard accessories - USB cable in ear mini earphones  and the


As you can understand there was a “very long route to Rome” after the damaged model In the mean time after the original Ruizu made its destination has been littered to the dustbin .
Another funny is that a very simple model as this has so  many variations that can impress anyone.

Player details
Both original and my new have the same external design  the font panels you will see below, the Evo digitals model does not have the logo of Ruizu Also to notice, the twin model is 3 grams lighter than the original! 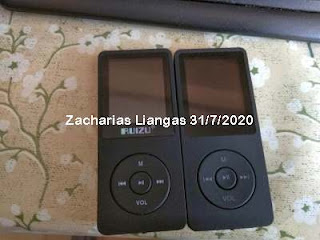 The twin model has the SD card in lower place  than the original or the EvoTher is not practical difference except that the card is added a bit difficult for my very fat thubms ! 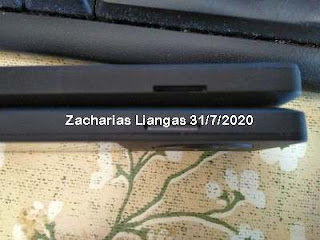 adn this is the maxi diference between the Evo /Ruizu and the twin model : simly twin has also speakers behind 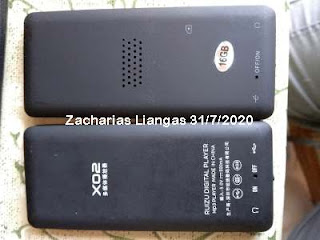 but also see on how the two models differ in the bottom ! all buttons and sockets are the typical  English way of putting everything in opposite! even the switches are inverted and both are in off position ! 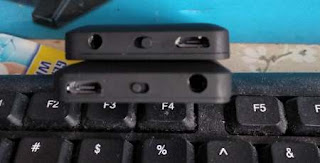 The menu is the same between the Evo and the twin as you can see . But the older model has a nicer menu with semi3D  icons that madeit seem much better 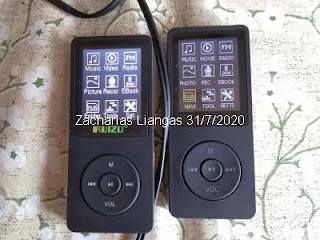 Playback is different  between all models . The old has the lines as with the twin as shown in the right while if there are lyrics attached to the file they are shown as in the left player . BOth old Ruizu and the Evo Ruizu show the playable bars but are the half of the noticed from the twin model 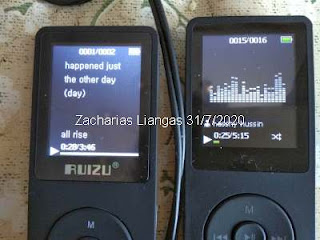 Even the layout of the fonts are different! The twin uses nearly the same font as the older model The Evo  derivation uses more rounded font  roughly similar to Arial fonts ! 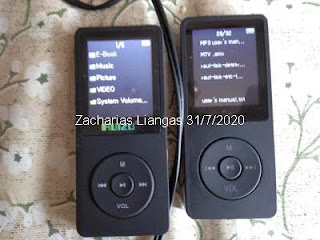 Looking at the inner operations from the menu I found several interesting things
-All players support many languages from the settings menu . The older supports English Greek Thai German french Dutch among the 20 languages supported
I have seen that the EvoRuizu does not support Greek ID text but it can show  the file names !
-There i a song commence operation under the songs menu in only the older model!
-Once memory is updated with new songs , the older model does immediately refresh as several models did in the past . In contrast both new models do not require any refresh as far as an external SD is added . Refresh is very short in case it is updated in its local memory
-Audio wise the new models  have a sharper curve from nearly 800 HZ and above compared to the original !This irritated much to me since the older has been tested to be in accordance with my Tecsun  Q3 recorder's quality which has the best audio fidelity but is not truly a pocket MP3 player !I Used it only for radio recordings from shortwaves
-Even funnier is wit the radio . As far as i remember  the original was monophonic . The same happens with the Evo. In contrast  the twins are stereo with suficient sound quality !
-WAV MP3 WMA OGG FLAC APE and M4A are  the supported audio formats as tested with the test files . AAC is supported but only one channel is heard. MP2 are also played in double speed with a weird audio for the white noise.    Neatly most bit rates are supported

-Playback is identical with the previous: FF and REW can support only the standard FF but also scan on  longer files with higher speeds after 5 seconds
-Battery not tested so far for the twins , It worked well for around 40-45 hours  for the Evo/Ruizu  The original operated around 80-90 hours!
- the twin model is the only with update  option !

The earphones of both models are totally junk.  I used an AKG model that is more expensive than the player itself. It was in bargain price of 18eu plus 5 from Italian amazon three years ago . Its original price is around 45 Eu but seems discontinued in favor possibly to plastic models
Verdict : I m totally amazed on how a model has so many variants except of firmware versions. i tis very possible that this model has more versions that i think ! Anyway the model performs very well for its price tut bis not for the audiophile
Notice that i m not audiophile but just person who needs some good audio >The only problem is that some songs were recorded -not by me -with very high treble level that irritate my ears and enhance  my tinnitus!
this is the reason that mine have been given to a  a friend later to unfortunately favor a nearly same fidelity model as the Amoi /yescool C10 one of  the heaviest metallic models i ever tested!