For tat time the model has been left aside for very long time till last tow years when i decided to give tat to my daughter thinking that he sound was not so good for my ears.As noted in a previous post the model has been found while checking in Amazom on around 17 or 18 and finally has been ordered via the Italian site at only 18 Eu plus undefined low shipping It reached here in around 1.5 week AFAIK. The original price was around 40Eu but in an American site  it was priced at around 90USD  tat only 18Eu the  price is a real steal

It sounded quite dull comparing to this Sennheiser model as also between i think the AKG 77 for that time , ie unclear and rather bassy

note : the model as far as i checked the recent times is not available anymore  . it has been upgraded to the 180 DJ or something similar 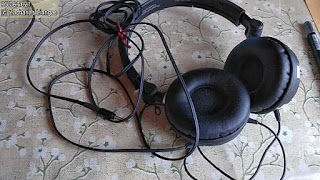 As it can be shown the AKG 81 DJ uses a very long cable , around 2,5 m possvly good fro DJs  This is a supraural type that is kept over the ear 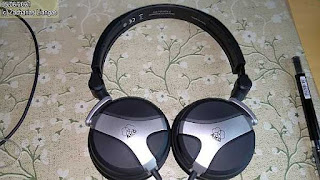 A very nice design with radials of gray color . the earphones are also twisted by 120 degrees 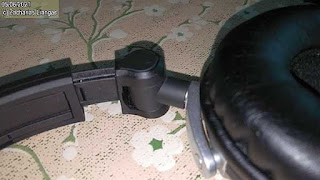 as with all models the arm can be detached a few cm . In the case of 81 there are something as griods that operate as 'stepped stops'  with steps of 2-3 mm The total length is around 2cm and locked by the pressure of the head Under it there is a mechanism to turn the speaker by left right but it by design can also be turned down up by a few degrees 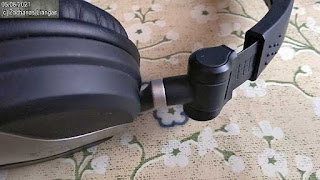 The above photo shows the locking steps. All the design is very ergonomic and easy to be worn. 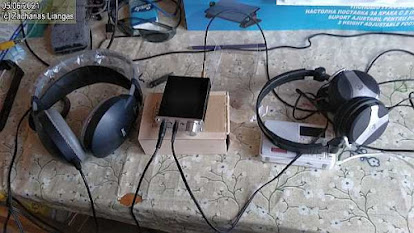 A messy table due to very many things. I recently bought a very cheap but very good audio switch with 4 ins and 4 outs from Ali at only 15Eu  (product link ). It really saved my life to continuously plug and unplug cables for testing sounds You see it over a box . Hoping to review it later There is a Q3 player with old test songs together with a personally made audio with 17 tone file to test heed- and ear-phones. At the opposite zide there is the K77 still  ion its plastic bag, even if that is used more than 7 years!

the idea was using te audio switcher in two ways : First by  cheeking the sounds in the sharer mode (connection as in the photo) and then in the switch mode - inverse cabling - to check the audio levels

being too much adapetd to listen with the 81DJ it was rather uneasy to listen to the 77 as the sound was very different : same trebles , high lows and sub lows as part of the middle band is also strong over the 81 However after a more than 15 minutes my listening was adapted feeling better

The original sound of 81DJ has some high deep and low lows over the voice and good highs. In other words it is quite and deeply bassy giving a feel of dead middles and upper middles

AKG77 was then heard wih better vocal and instrument presence intensifying them while listening to the music . Sound stage is the same . In many cases 77 get better in hearing but after more than 10=15 minutes the sound is felt rather "bad"  or tiring . This also  is song dependent

Therefore the results are rather mixed , possibly due to being more accustomed to 81DJ Anyway this is my main headphone with sometimes more than 4 hours of listening..

As you know I am a member of Aliexpress since 6 months ago . I have a made a few purchases since then with mostly cheap audio products . I also do also a lot of looking at various audio products and also receive lot of messages from the site

One of the most interesting things I have seen so far with lots of very positive reviews in both the internet and YouTube was the very cheap KZ EDX in ear earphone or IEM that costs just 5.8 Eu directly frem the KZ Store in Ali

Yes a very cheap model . The shipping costs are 1.7Eu that raises the total price to ca 7 that is still good. The shipping was smooth in the period when two other things ordered from Ali returned back to the stores , the one was due to delays from the seller and the second was never exported
The parcel had early the same problem but got rid of it very easy. It reached Athens in just 16 scanned but someone fogot to put it in to the  receiving box so it  followed a flight to Eire for 1 week then returned back to Athens !Just a few days after it was delivered by registered mail to my house, thank to the tracking services!

After a few days of rather personal difficult situations i devoted some time o test it. 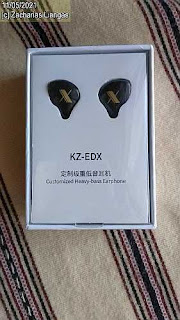 This is its box . the buds are separated from ithe cable for better protection 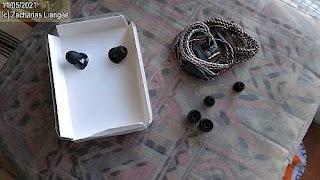 All the inside box in a short view. BUds with the standard middle tips, plus small and wide tips . Plus the cable .Plugging the cable was a bit difficult to me as it required much force and care . 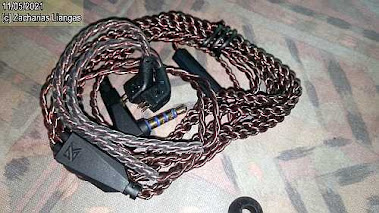 The cable has been ordered with microphone . its very possible to use it with my smartphone instead from the other cables the plug uses a full plastic plug base below the wires. I finally after trying several times managed to plug it into the monitors

There are two  info sheets inside one of them is the users guide and a guarantee sheet. It is completely written in English that is NOT typical wooden Chinglish but neither poor English! THis little guide is the best insider on audio i ever read reffering not only on how the noise effect into listening but also how long you can listen to high level sounds before having any ear fatigue , the burn in that is nearly not necessary but also on how this can be installed into the ears. These guys are using a very poor text language but they are very good professors . They requite to recruit a fluent translator

I cannot use the middle ear tips. They are too small to my ears and the sound is not only leaked but also lack of  the essential bass . The wide replacement ones were very difficult to even slide into the earphones tube and finally i preferred to use a rubber foam replacement of T400 Comply clone. it was much easier to damp into the sound tube.

After this i started my review as below:

The First time listening with some music with extended frequency range on the Q3 player: sibilant
for total time of 10 minutes

Second time after 6 hours listening to the same song : not so sibilant ! (just burn in? )

Finally it was taken by my wife who for the first time thought faster on how it is put in the ear!

More experiments from the technicians view

Sound magic  vs KZ  using parallel listening that is listening to the same audio channel and using them AM bud in the left ear and KZ in the right :  KZ sound is 15.2 db higher than the Soundmagic as measured later after recording them both via a microphone in my smartphone . The very highs are quite higher as also the basses

Here is a screenshot from the program without normalization. you see how huge is the audio deference. Describing that  in terms of drawing with -10 to 10 where SM is only -10 and 10 for only KZ sounds are termed into  point 8

By separate listening and adjusting the sounds to be in the same level , EDX has higher bass and higher trebles than the SM These sounds are extend to the higher part of the high band . Graphically this sounds as like this way

The thick line shows the middle of the hearing that is the nose as you an see all the sound goes to the KZ with little more adding in the very high sounds Most times the bass difference is not so 'visible' to the ears.

verdict : Technically the IEM is quite good with near sibilant audio Concerning the price it is more than good . 4.5/5 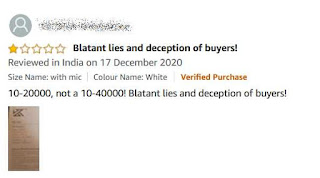 This is the funniest response i have seen in Amazon as any one can understand on the layout of the review . 10-40KHz as frequency response as referred . Really  the 20Hz was audible to me even if this so low frequency is not so easy always to be heard ! 20 Ha is the lowest frequency that a human ear can listen. This is the same with 40KHz  The best ears can listen up to 20'K'Hz.