Just looking via the net  I finally read this  article  in xiaomitoday page that aroused my interest to look for. The writer was well enthused for the quality of the product plus  its audio. Some local research shown prices from 19.5 plus shipping via courier etc With little more research  I found that in my city for just 19.5  out of around 25 -30 in other stores in Greece ! Due to covid19 conditions I Used the 'click away. method  and then immediately gone back to the house!
Notice that I was quite enthused to read his article even i was quite suspicious that it can't all be so true! 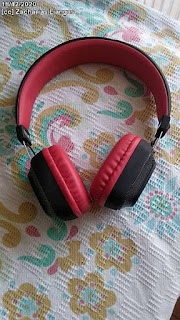 The model is provided in 3 different colors black red and green. I preferred to order the red model. 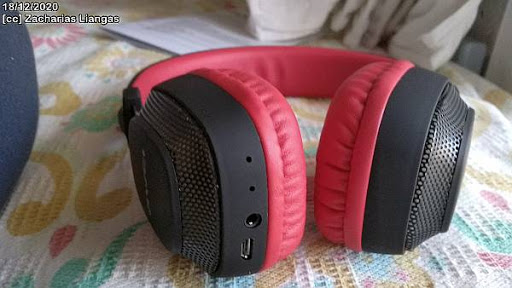 The model has the typical connections with optional stereo jumper wire for compatibility with non BT audio gear or older models as radios etc . There is also a mini USB D type socket for power adaptors . Around 2-3 hours for full charge. It's battery  was nearly empty at the time of purchase. 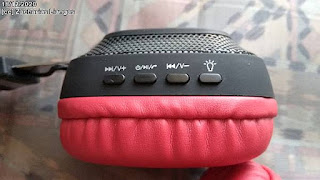 These are the only controls offered on the model.
-A lighter !
-in the middle of the control buttons is the on off button.It is also used to received  telephone call
-previous /next song buttons or volume control

The headphones re also supposed to cancel the external noise . as the writer in the xiaomi page notices:

They cancel noise very well.when i used them for the first time it was like everything else in he world had gone silent

I don't know exactly what happened to the model reviewer but the earphones were partially touching  to my ears leaving some space on their bottom as it can be seen in the photo below (around 6mm  space!) I needed to experiment more to find the optional position by tilting the headphone skeleton towards the front of my head  for the best  isolation 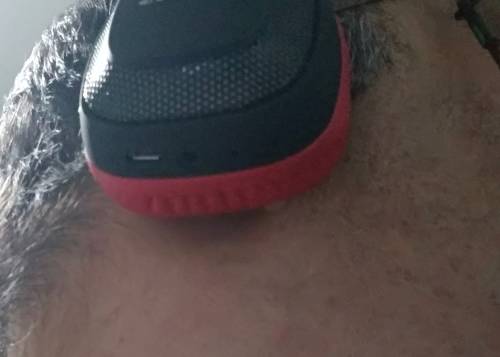 Its clear that most part  of the environment noise can be passed via the earphone without killing the outer world as Awei and him advises!!

What is mentioned from his page about the sound quality  :

promises crystal clear sound quality and provides it.  While the bass is not too much keeping in mind the security of your eardrum, while listening to some pop or rap music or some heavy death metal music, a decent amount of bass can be detected by the ears. But if you are someone who is looking for a very highly boosted bass, you might not find these particular headphones to your liking.

Did i notice my finding? 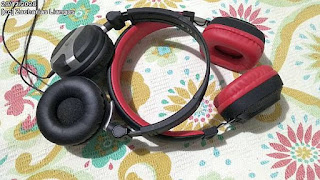 I used a forgotten model of AKG 81DJ model (DJ model??) I own this set around 3-4 years ago. It was bought at 18Eu via amazon, a original price of around 40 Eu but discontinued even longer.  They were tested by checking first  the wired AKG and then the Awei .
AKG model has relatively low volume and is a bit bassy . Awei model is much bassier than the AKG with lack of some high trebles and a rather high bass that  covers part of the  middle range. As in result it sounds relatively dull  This is the result of Awei in Bluetooth mode with my smartphone

I then am curious which headphones the reviewer uses as 'pattern' or specimen to test the gear !!! Did he ever tested with more serious models as I?

Next test was walking inside the house and a paired with the smartphone. The max distance  is around 7-8 m with two walls in between, The building is 60 years old with just one brick-fat wall Just 10 cm wide!

As in result the headphones are not 100% what they promise. Not very hifi but just a middle level that can't cover the full distance as promised ! For the money at 19Eu the results are good but for 30 Eu are over priced!

The ribbon cover was offered free of charge but separate from the pleyer box inside the parcel!

AS  most times, I do a service to many people by just  direct importing for them and then just making a short review before giving to them. Just look on the remain web page  to see on how many models have been already tested so far . older models were tested long ago the time i was a Multiply.com  member which page has bot been fully transferred so far here .This is a neighbor who has a string interest in high quality or fidelity audio systems as he was involved around 30 years ago

Model  has been found via Ali with a price of around 45 EU plus only 2 for shipping with a total of 2 months of waiting.

The model is a rather complex in terms of operation   and screen  regarding to any others i have tested so far: Prev /naxt menu back /pause and volume buttons and roller that tis quite weird . Wheel is also used of the menu , volume and back buttons  instead of the prev/next buttons for faster access

As noticed in the main page the model is upgraded.

On off button is used also for locking the player. Audio out is 0db and is programmable from the menu for 0 ,and db levels. Using car mode that supposedly normalizes the audio levels have seen no real difference

Here is the bottom that shown the USB connection and the USB socket isolated. For unknown reason the socket was not only isolated by the mini plastic lid but also by a sticker above A 16GB  original Japanese SD card is used as main memory as the player lacks inbuilt memory! 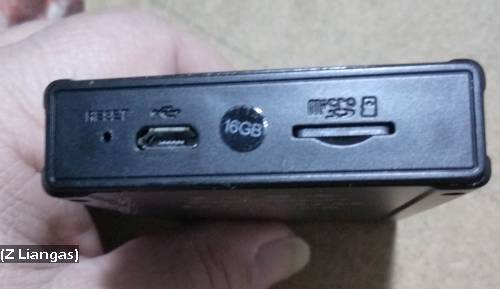 And here is the real inside. I m not very sure why they double isolated the slot Once  i reinserted the memory the player started alone and did a memory refresh. Another time i tested removing and re-inserting the card but nothing happened. Surely the first time the player was on...

This is the main screen for the file playback : 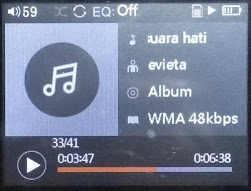 Screen has good analysis . As you see on the left includes the album photo if available  and basic ID3 tags plus the file mode . Text Scrolls leftwards in case text is long. 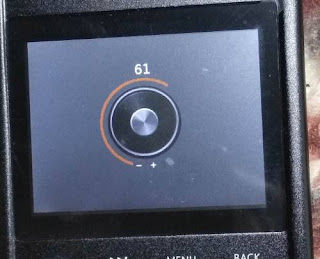 This is the volume control as shown in  the screen . The 60 is the standard but depending on the recorded volume. in most cases (-2db recordings) it is a fair volume that does not annoy the ears 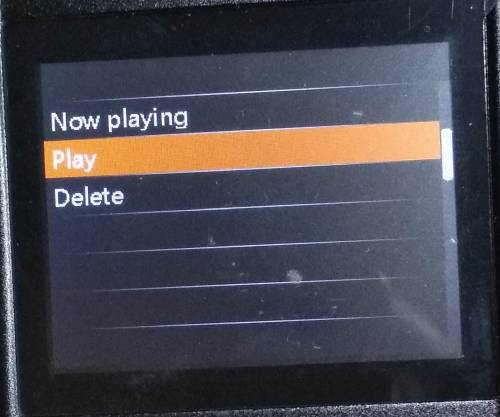 This is the only way to play a  file you selected the time another song is played. OPerated either by wheel or by prev next buttons !

There are many other interesting operations and typical to all players that I will not go further (off time , sleep , refresh ,  favorites etc ) I wll only show  the results of my usual tests on operation and audio quality

This model is audio file rich as is offered with 15  files of these various modes with pop Chinese music full clips plus one to test your left and right channels!

I replaced the offered mini earbuds with mine AKG518 foor the best experience . They are very good for their size  with manual voice slider Good  for Tescun radios which have a stepped volume control with rather low toleracnes

The songs offered in the inbuilt SD memory sound exceptional and flat with nearly natural sound. Much better then my personal song collection from original cassetes or downloaded Malay songs

Her are the results of checking various file formats

-MP3 and various bit rates all played
-WMA  the same.
-OGG various  bit rates the same
-MP2 played smoothly in mono . most other players speedup with funny tuning as like siren!
-MP4 played  in low quality and mono
-AAC the same with MP4
-AIFF supported but not by the remain players as Ruizu or older
-APE   FLAC and MQA-FLAC also supported
-DSD  64kb 2.8MB and 256 11.2 MB supported The 256 mode is heard at 1/2 of the main speed
-Stereo MQA FLAC supported
-5.1 surround versions not supported  For these versions We have downloaded test audios from a site . Very huge files with a total of 600 MB of size

-The player has not internal memory.
-There are two player setting for audio volume: line level with audio synch/-3/-6 db and memory/ custom. On audio synch the line level is lower than the volume level so that the setting at 60  is equal to the headphone level at 14!!
-Car mode :as far as it is not used via the line input the player is shut off abruptly!

The final user advised me that the wheel sometimes lacks its scrolling.
-The on off switch started losing its contacts  a bit after the first  70th hours  of operation .He also noticed that 2-3 seconds are necessary to use again the power switch for locking the player or doing the next process!
-around 65 hours are enough to drain the in-built  battery .It is recharged in less than 2 hours

I Did my best to show the highlights of this very interesting and quite 'expensive' model.If you liked my article just comment below and share this page to your friends!This is the least you can do for me