Just 8.5 Eu ? Can this can be true for a company making the most powerful and high quality audio equipment? ?

JBL i one of the latest companies I know wince this century . There are a lot of models sold from tis company in the local market together with Marshall especially in the big chain stores with high tech. Many of their products are priced a least 25 Eu as the Bluetooth speakers Go 2 series and the plastic headphones at Eu 29 These are the cheapest items  in the local market

I was quite curious  on ow this company wit the highest quality products could sell earphones at so lowe prices.

As with last times, the price was found in ali -where else?- from the  JBL site. It is located in Hong Kong. 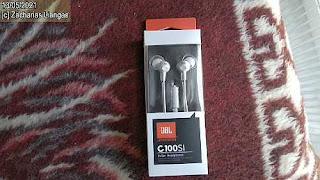 Total delivery time : 60 days relatively late but usual time in the covid period . She solution to the problem is clear : Plastic design instead of using metal materials ! But still the price is very low

It was sent into a quite bulky pack of around 50x30 x15 for keeping the earphones box as safe as possible ... a kind of accordion  of air filled plastic airbags 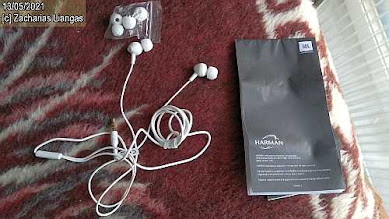 These are all the things included inside the box : Double Info sheet mentioning Harman Kardon the first refers to security reasons of using it and the second for littering into waste . More than 40 languages are included into the folded paper except Greek.  Earphones are bonded with a twist tie nearby the plug and finally a set of tips of two types of width .The standard tips were OK for me

BTW i was not sure that Harman Kardon is the mother company .This was one of the most HiFi system makers of the 80-90s 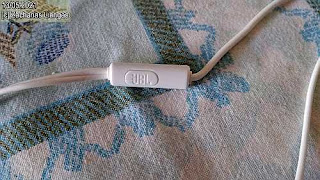 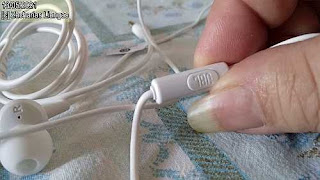 The cable is normally thicker than the typical earphones cable at around 1.4mm , similar to the RG14 AWG cable in  thickness. Your typical  smartcontrol is very simple just a push with the brand noticed in the button and the new diagonal designed earphones similar to most smartphone companies of today 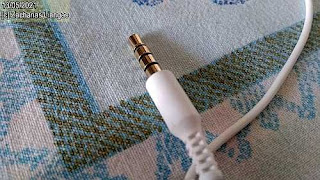 Unfortunately the king is naked - lol . Many HIFi models offer the audio plug with a small plastic cover. 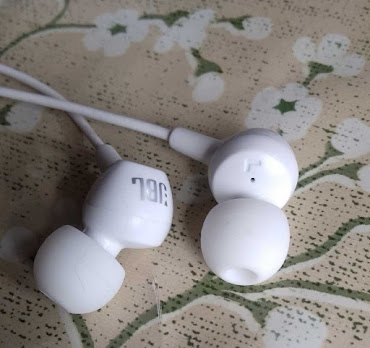 This is just a typical earphone? Just testing the sound is very huge similar to the headphones . I had the typical AKG81 DJ near that and tested both . The sound was as strong as the AKG headphone. Moreover the sound has more trebles than the 81DJ!

Using the smartphone : Thai music is very clear with a but a little loss in basses
The same for the official Greek and Chinese music channels via Youtube
I have a lot of playlists from the SE Asia

Listening the same in the mini PC : bassier with little more treble The volume level is just 10 out of 15 volume steps with my standard Sennheiser headphones HD497.

Testing a song with my Amoi DAP and PC : nearly identical except the little higher bass in the PC (<3db )

Testing with my ear linear Soundmagic  E11c HIFi earphones using the parallel listening method and in A/B (changing earphones) : JBL has a little higher audio level than the SM (<3db ) but the sounds are quite treblier with little more bass .This is the typical U curve most earphones use today .

This is on how the inbuilt microphones respond to a series of tones to form a curve JBL has smoother curves. 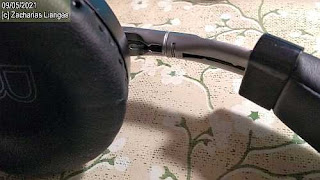 After some time I finally won to replace my Ninsheng BY model with a better model that has not the quasi 3D sound. As noted there the previous model and its 'house siblings '  have the common of "spatializing" the sound into 3D and enhancing the basses and the middles. That means making a head full of low freq sounds and make me crazy !

This is now the nicest model i have. It comes with aluminum blade as armature of ca 3 cm in eash side very nice color a. It is the flagship model of the Bluetooth of the companys headphone models . 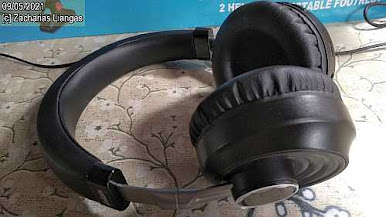 As you can see the blade is around 3 cm and relatively big speaker that is over the ear.  Nice leather like isolation over all the arm and mid heavy for just 200 grams 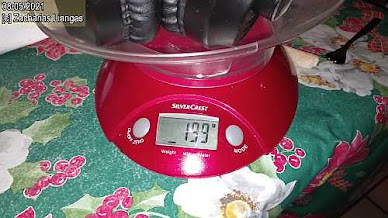 Hmm just 1 gram lower than 200! It doesn't matter so much 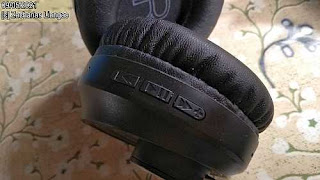 In contrast with the other models the P31 has only 3 buttons with enhanced operations. the middle button powers on and off, stop music , while the two others do 2-3 operations : change the mode of operation , scan the radio, control the volume and jump to the next /previous song 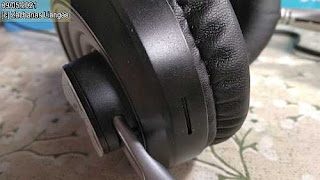 and the SD card slot

In order to pick it the seller left me also check between a few company models company before picking it . The sound is quite bassy but with rich trebles and cross checked at the same time with mine AKG81DJ which has a bit narrower sound range(above the 10kHz part )  using the Q3 Tescun player recorder with test songs !!

As with most typical bluetooth models . te HP31 has quite deep basses that extend a bit to the normal voice band with audio range that covers up to 20 kHz A that is an extended U type curve with narrow lows.

Its most important feature excludes 3D sound ! This is the reason i took them! I now feel much better listening for indefinite time.

Tested with the mini transmitter and the latency is around 0.2 seconds  this is possibly due to the transmitter latency . use also with the digital TV receiver with very good audio.

With my laptop : the laptop sound is unfortunately quite bassy but the results are OK and can be used for long time listening. Tested  in stream radio and in Youtube and is heard very well The same with remote radios from the Kiwi Net used by radio listeners and radio amateurs. This model can replace my standard headphone Sennheiser HD493 used since mid 2000s in other gear . The HD493 was repaired the last month but the technician damaged its sound linearity and i feel it now as also 3D This is the typical options when he headphones are paired. IN headset mode  the sound is heard monophonic

IN the bottom of  the control panel there is a typical 3.9mm stereo audio socket.

Zoom to watch the  full photo . as you can see the lower part of the higher band is slightly lower.They re recorded in the same volume 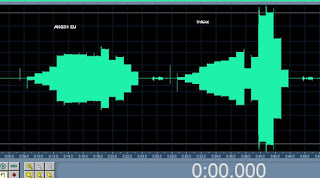 The above audio by amplitude

Radio: The only drawback as with other models which produce monophonic  sound and poor reception. I think that if the radio could have a terminal to touch the metallic armature the reception could be quite better for sure!

SD operation : It plays all standard audio formats : WAV MP3 and WMA .Sound is quite bassy as in Bluetooth mode. Changing files is a bit awkward with continuous use of the next back buttons for 1-2 seconds to select the song in sequence, It does not play songs in the exact sequence.

Battery : this is its worst point . its battery lasts only 3 hours as tested so . Upon that i returned back to the seller the headphone only for a item only change but they denied. This company is bond "to their protocol" or the typical procedure disregarding to adapt to the reality As therte is no space in the house i always litter the box and separate all the accessories just in the case they will be used. I use it alone with  my standard accessories in a bag. its very possible that this battery will be expired very soon.
Its funny that after charging it to the full for 3 times without using it after , it operated for 5.5 hours continuously and still having more in its battery...It finally lasted 6 hours.

Verdict :8/10 it has a very good though bassy sound with the most typical features of its category . Very nice ergonomics  and design Its main use ids for remotely listening various TV programs