Following the  negative  review in a previous post, i suspected  that the  problem was from the battery / I  did a search and bought  one new battery  via the ebay.  The battery costed  me abt 12 Euros !
I tried  to open the case but it was  quit tricky to me . dfo this reason  i given it to a tecjnicain to do the 'dirty job' IN just 2 minutes he opened the player unscrew  a screw and  change the battery . And Player is now working properly.

Now the  player after the welcome screen  it shows a menu this way: 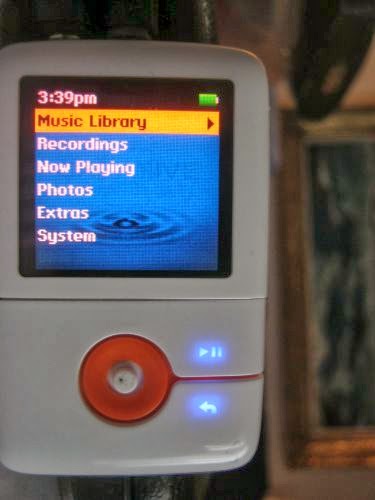 At fist i thought that the  red cycle  was the navigation knob. but could nt  do anything... readin a bit in the user's guide  the navigation  is amde from the  middle button that worls as joystick
The menu consists  of the music library , recordings , the just playing  photos (ie very small sizes , some extras  and  system settings )

Teh recordings menu shows all recordings . microphone and inline recs / for all  files as  well as the tansfered files  the screen shows  the filename as scrolled . Pressing the joystick  for several seconds i shows a quick menu for adding  the file to playlist

The  player is recognized as a portable device . not as a removable disk.More on the end of this article 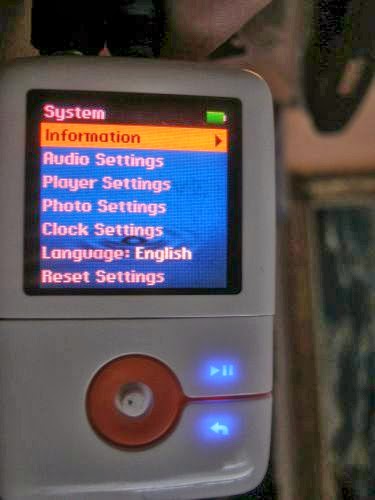 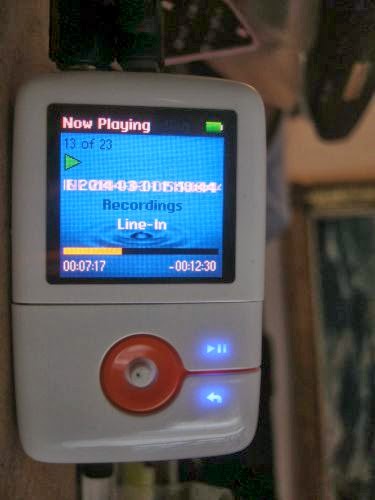 Here is how a file is played. Special additions  are available  wth prolongd push on  button as  add to  favs , add to playlists etc


Recording
Recording is  the  main reason i bought this player .  Not only for  shortwave  logs but also for recording audio tapes , vinyls  etc
This is the reason that this part is more dedicated . I very sparingly use it for playback 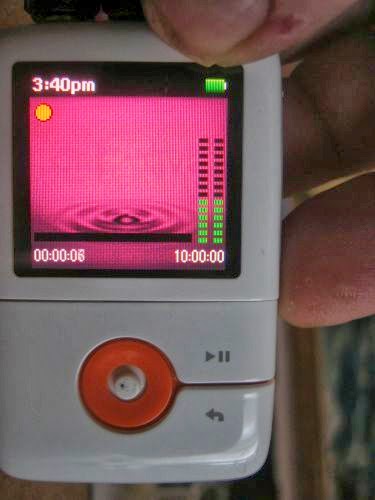 Here is a photo during recording. recording is made by pressing the REC button  int he right part of the player  .In contast to  Nano plus  , Zen V has the ability  to adjust the earphone level during recording
Tere are 3 ways to use it  for recording
1. use the special  button  at  the middle of right side of the palyer
2. naviagate from the extras  menu
3. from the quick menu

In silent mode (is when is not recording ) you can also make  these ajustmensts :

Maximum recording time is 10 hours (still wondering if that means  ).If part of the memory is filled with files it shows  the remain  recording  time

I have bought this player only for this  reason . I think that its memory is quite small. Nevertheless 900 MB are  enough for making recordings  up to 980 minutes
Testing  recording differences  between V and  Nano : As noticed in my  audio  test  site on ipernity severeal people  found that V has a bassier   and  richer audio than  Plus

Audio : Creative was the leader  on computer audio systems . Therefore their fidelity is surely the best  among computer audio equipment  . The same applies to this player . Using the tracks provided with the player the sound is superb . I have tested  with the Sennheiser headphones which  have the flatter audio  response among my headphones. The highest possible level is still not very strong with these headphones

Comparison  with Zen Nano: Using the Sennheiser  headphones  ,the sound is nearly the same with V being a  little  bassier . I used the audio files  provided in  V for this test

Computer connectivity:
Instead of being recognized asa typical  external media storage it has  the format of a device as  printer or external device ..
The player can be synchronized with the computer's media player . Drag  and drop can work only for  file transfer from and to computer  but cannot  be directly applauded to any site via the browser. The files  have fist to  be transferred to computer and then posted !
I found that in Win XP  the files have registry format numbers etc  that means as a peculiar  string format esp the directories  produced  by the install shield or any other  installation proram in the  /temp directory
Once i have changed a  recorded file via computer but the player still shown the recorded name !


MY verdict: 4/5
Zen V is an excellent recorder and player with  a rich sound. The only awkward  is with the connectivity and bevhaviour of its files ...