Lens magnifiers for smartphones
Not long ago, while searching on ebay for smartphone audio cable replacements i  have seen this interesting thing. The company offers  two or more  models in the same page. all fo them are 12 inch magnifiers for small or medium sized smartphones for a modest price of 6 Eu. I immediately ordered two models one with stands  and another that seems as folder
After some minimal disputes of not using a particular shipping carrier the company used another that was received in 50 days quite good providing that shipments are regularly delayed or slowed well down from the older standard of 25-30 days typical. I many times bought some Rf components from China for the whole 2019 and earlier things that canot be found in the local market
After unboxing them and visually testing i found that there was something wrong with the one of them :
Its clear that the white piece is a typical folder with the magnifier as part of the folder 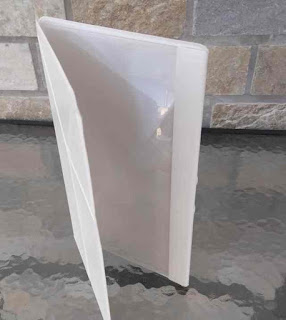 Checking that carefully i did n't find any way to support the magnifier in the base neither the rear part. The only way to keep it 'working;is folding that in delta.
This way is totally wrong setting, what I call delta assembly . this is just for photograph but not for using it The only way fir using it is putting the smartphone on the bottom part 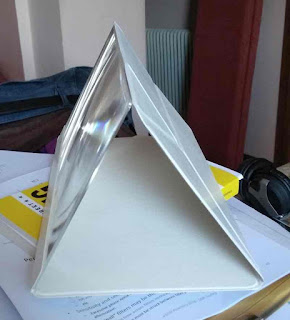 This is on how videos can be seen if yo put the smartphone flat in the bottom  panel. Can anyone watch a movie this way ? I m sure  none can do or  will be dizzy in two minutes ! I tried to take a picture but it is not what  the eye can see!! (inflated top parts ) 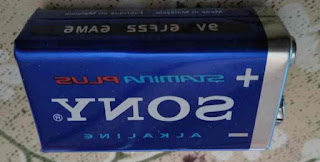 Now see this photo  that shows what is right and what is wrong. Putting the front and rear in delta not only is wrong  but also makes the smartphone shown as wry Both front and rear panels must be TILTED in parallel with some supports while the smartphone MUST have a holder to be kept stiff in its position , exactly the same as the black holder does !

This is the reason that i used supports BEHIND the magnifier with the radio and BEHIND  the rear panel that supports the smartphone. NONE OTHER could do such work with supports as i. 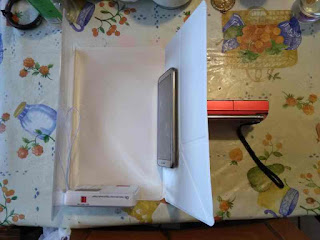 That makes me feel IT IS TOTALLY USELESS for watching any movie unless i must use these external supports to keep both the magnifier and the smartphone support in the correct position to watch the videos
About the 'insides' of the system :Its lens is totally plastic based in the Fresnel lens with a surface tha resembles the finger


By the way  the other support does the job much better as i must be : 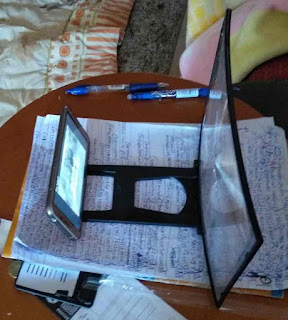 This is the correct system with. the correct positions . even quite simple its drawback is the modest deign with the minimal material that can easily break if not carefully handled This is used excessively by my wife all the time since it was received . I think  that even it could be better if the maker could  replace the plastic with aluminum or even thicker plastic that could make it more durable.A few bucks more can save it from easily breaking  As for the moment the first broken is the smartphone holder hat keeps the smartphone stiff in its base

As for its visual results its is poor to fair but good for its price .  Dont expect with a plastic lens to have the best resolution!  There are some aberrations image blurring and even some wry  imaging if you dont focus yourself in the middle of the 'screen' without moving yourself . It  is the best you can do with minimal cost to replace a 12"  TFT screen.

Ergonomics /tolerance  : Between the two ,the best to tolerate the press and the longevity , the folder wins for sure even if this needs personal materials as supports . I don't think tat the black plastic can have as long endure as far as the folder. The makers had to be more practical with the folder to include a few more parts !
my verdict:
Folder: durability 4/5  usage 1/5
Stand: material quality 2/5 usage 4/5