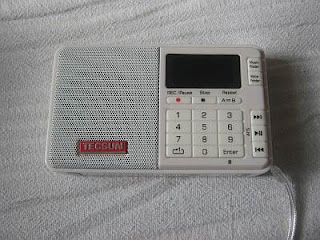 (also on my radio web page )
I m very curious why this model has a very low audience views ...
Following  the demise of the  Creative Zen due to sudden  battery drainage , i decided to look into a better and more up to date   recorder for all usages.  I found via the ebay  a slightly  used copy of it for only $5 which i ought it immediately that came  in ca 3 weeks . with little  more search  i hacve seen that the normal price of it is $25 (price of anon co )
Q3 us not so small gadget of  10 x 6 x 2 cm size , nearly the  size of a cigarette box.  This model  is circulated with  two colours black or  white  The model i found has white colour. 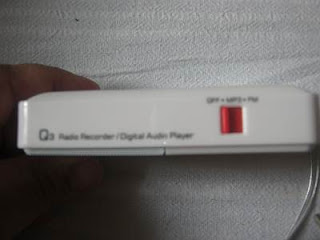 Opening its box , most of the operations lie in the right part of the  gadget . On the top youwill find only one three  position  switch,
The positions are : OFF , MP3  , RADIO . In MP3 mode  it plays either  the mp3 collection you have already stored  in  the SD memory , (not included)  or the  recordings you already made (and stored  in the SD memory ). In RADIO mode it is a FM only radio player 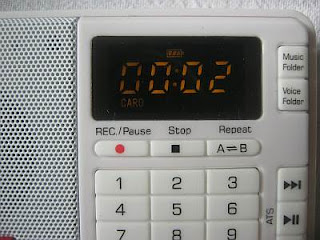 The front panel include  green LED panel with the standard operations . ON the right  there are two very small buttons for the audio folders : music folder & voice folder It is better to describe here how the  files are shown in the  LED
- IN mp3 file mode (music folder )the player reads the  files in unsorted mode starting from the fist file  is copied from the computer and starting from  the main   MP3 directory and a serial number (counter ) is shown in the LED screen .   If there are  files in directories  it reads them  sorted (?) with counter;s number to follow (ie of the main dir  has 15 fMP3 songs  the next number  starting with the  subdirectories will be 16 not 1  )- In voice mode (voice folder ) , the player shows the corresponding serial  recording .Once you look into your computer , the files  have a  letter in the end as like 15M meaning it is recorded from microphone , 16 L  ie line recording , and 17R or 17F  ie from radio
Under the LED panel there are three buttons : REC  for recording  a STOP  button and a REPEAT  play button all these are self explaining There  is a numeral keypad with a  repeat button and enter . This keypad  works for the  frequency setting , the mp3 or REC file setting There are  three more buttons on the right edge of the  front panel : Next or fast forward / pause or play / previous of reverse that applies  to the recordings and  to radio mode . 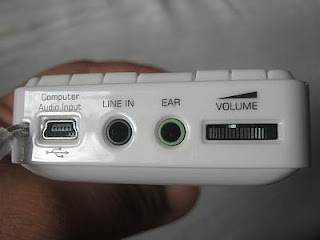 Now on the  right part of the player -A USB  socket  written as  computer audio input . did nt try if this can also transfer  audio , but all this time (at 3 months ) used it mainly to charge its battery. The computer to Q3 transfer speed is  very low .  -A line in 3.1 mm  socket and provided  cable  abt  25 cm .-An ear  out 3.1mm socket .-Volume control , with analog  resistor. Audio is quite high in all modes as radio , as mp3 player and also as radio  recorder  but many times  the audio in very low  levels  is prone to turn on the one speaker  (either on the left or the right  depending n how you put the earphones into your ears)

IN the bottom   there is a Sd memory card slot. I put a old 8 GB memory 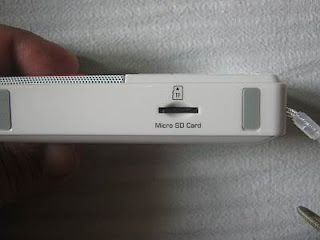 A few notices  on the  operation of the gadget:
- Radio ; it is  only  FM radio . You cannot scan  the  band without making the radio auto-store all frequencies (ATS) which is bad for me unless i start  delete more han  55 out of 65  stations in my  place . Therefore i prefer to enter the frequency via the keyboard.  Its audio  is relatively bassy  , and lacks stereo   spatiality comparing to all other radios i use. meaning all stereo stations are heard  in between   mono- and stereo-phonic .Audio is good though  bassier than  other radios (1126  and 380) and once recorded shows the same quality.
-Recording  : Line in is activated once you plug the cable onto the socket and surpasses the radio or mp3 operation . Tested with PL880 , 380 and once via an old unused journalist recorder unit with  a really replica quality. This  journalist recorder  is not supported by Windows 7 I cannot find where is the inbuilt  microphone .  The quality is good and has been used to  record a seminar of ca 70 minutes  which was  the lengthiest of my recordings. The best to get out for audio quality from seminars is to use it on a steady place far from your clothes.
I did a crazy experiment  with it connecting it to my tablet. The tablet   was connected on the main via its wall adaptor. Q3 was connected to the tablet  in two ways : USB to USB cable for charging it and  the audio cable to record from a streaming radio.  Audio was  very good but i preferred not to use it for a long time should any  damage caused to one of them . The seller advised me to use  separate power adaptors  for each.  Everything  is recorded with 128kb MP3 /22 KHz as standard . 22kHz  is bad selection.  Though  very good audio for my ears , it is inapropriate for commercial works such as  recording from tapes or vinyl discs.  This was the reason  i bought it but for the price  i feel very hapy . And the last thing to notice. Any  recordings are time separated to 1 hr files. If your recording is longer than 1 hr the player will stop and immediately continue  recording under  a new file . Neither good nor bad but  i have not tested it so far to see if something has been cut  .
-Mp3 : i have tested  it with my favorite  (Crypto )Muvi 18 mp3 player  and found really no difference in the audio quality , and used my Sennheiser open  ear headphones. Both have an excellent  audio  with crisp trebles even Muvi uses  slightly more  treble than other  Japanese models(say Sansa)  . That means  an excellent audio quality. most  reviewers in Amazon  say the same.
The Q3 plays not only MP3  but also WAV  and WMA  files. have not tested  WAV  but WMAs follow  the quality  of Muvi.
Battery : Q3 uses battery model BL-5B Nokia type which was not included in the package. i found one  from ebay for ca 3 $  and is nearly the same charger  as of my mobile's (Nokia 6300) dimensions though a big smaller. Opening  the battery cover  is a bit  hard.  for one  time i charged it with a wall battery charger that supported BL4 , BL5 and BL5B  ie all battery formats i use for my Degen 1126 , mobile and Q3 , till  the charger reached its life after 200 uses in less than  1 year . Drained  BL5B required  abt 3 hours  to be charged  in full via the battery charger , but it was a problem with it since the charger  became hot with only this battery and I dont know why. Nearly the same  happens by charging the battery via the a power adapter . the power adapter becomes very hot  too.
About 7-8  hours  of recordings is  required to  drain the battery.