IF yo are using  Bluetooth earphones dont you suddenly need to use your TV or any other gear that doesn't have any Bluetooth ability? My TV is still connected with a digital TV receiver  that acted also as a signal amplifier. After I replaced the analog TV with a digital LED model I kept the receiver to make TV recordings for later usage. Later too some of these recordings were played with a tablet.

This is my third transmitter after two models have been proven not to be stereo.

The first was bouight via Amazon and returned back for more than a full modey back.it is a not only receiver transmitter with digital readout but also has a volume control , MP3 player included and FM band All operated in stereo  except the most wanted line-in  . The seller responded every late ate 1.5 week after my call via the Amazon’s  facilities

The second  model was bought  via ebay and received in around 2+ months. The seller sent the money back This money was then used to pay another seller who finally sent a reeal stereo transmitter ! 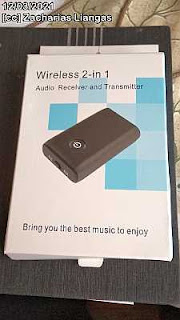 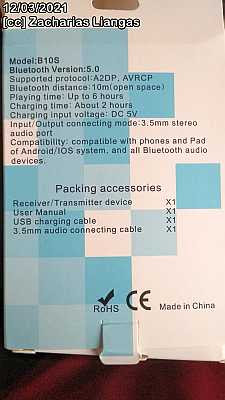 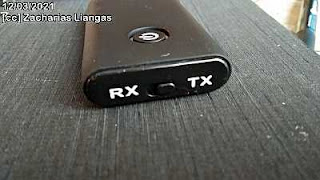 ON the 'front' side there is a button for receiving or transmitting  mode . ON the top part of the gear there is a small button finger tip size that while operating a blue or red light flashes .It requires around 4 seconds to switch off or on 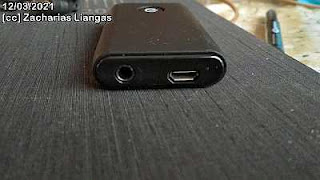 ON the 'rear' side there is just a 3.9mm socket and a USB D type female socket to charge. 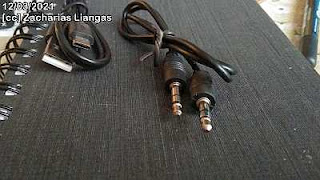 And these are the accessories together with the mini transmitter, a USB cable for connecting to the wall adaptor and a 3.9 mm mini jumper. I already had two jumpers from their  respective radio mp3 players with the same size so they kept aside in the transmitters  pack.

As noticed above the operation button requires around 4-5 seconds to start. I Used the very bad audio Awei BT headphones with their quite dull and relatively clear audio The transmitter found them in around 15 seconds when the headphones advised they are connected . Quite faster than the fist and in about the same time with the middle model  And really as noticed the model sounded as stereo!

In the fiorst time I have used a mp3 and radio player the tecsun Q3 . I use it many years ago as  a very good audio recorder but also as a MP3 player . its very poor in FM band. Compared to the fist model's MP3 stereo playback the sound sounded nearly the same as far as i could remind myself.

The second experiment was the final with the DVB receiver. I lowered the volume to nearly the one third of the level fot not burning the transmitter . Its line output is around 350mV . Sound is quite good  and clear considering the bad headphones fidelity.

The experiments continued with the range in between walls and direct. Around 7.5  meter distance to lose the sound with a wall of ...45 cm! Around  13m distance with no obstructions - just a wooden door!

I made a new charge and checked its battery duration  its total time was 4.5 with the DTV volume at the 1/3 as before that is still a bit high for my ears . Quite god considering its size but not 6 hrs as advertised!

This is a preliminary verdict testing wit the daughters remote earphones . I have found a model from aliexpress  for my wife that i m waiting for at only $10 that is very soon to receive with the hop that it will be better sounded.  - at least based  in the comments... My wife has very low audio requirements.