This is an old story of 2017 when i accounted to send that to a frind who finally proved to be extremely  egoistic and cunt.er cooperative in the most utmost level. I remover the o letter to describe on how i feel this so bad person. For example he always likes to make me mad almost every day during our discussion. He didn't like to think or  remember something except for short time or even read texts that can possibly help his life )

System restrictions in Amazon  impended to send products outside Europe I did the intermediate person to buy that for him. Finally after some clash with him he stopped to discuss with me calling that as  'divorce'. For this reason he preferred to  lose things of more than 150 Eu instead of killing his ego . Tell that vengeance. 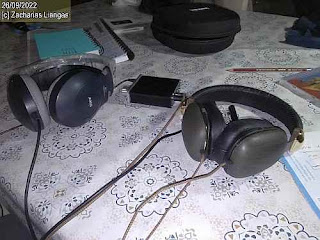 This headphone was at around 35Eu plus shipping   a s far as i remember. this was the era i bought a reasonable line of earphones from them for a total of 150Eu all of  them mini earphones with this being the only in their headphone line.

At above you see the setup used to cross test these two models . This is a very typical in all my tests, A mpo3 player , in this case the Q3 recorder , with the a multi-switch splitter and the two headphones in A-B mode.In the above photo you can see the Betron in the right part of the photo with a wooden like color  and a nice over the ear near egg type size 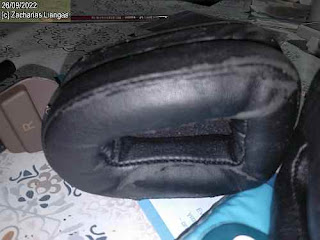 As you can see the inner part of he air pads ar rather ugly. Once i have used them with one radio of the Tescun series operating in total of ...90 hours at the barely audible level. They have quite strong audio similar to the K77 or DJ81 of AKG

The plug is quite different than the usual . Still quite operative !

Bow on the result . Testing both of them  it has a very different response curve . Think that it has quite increased  middles or sharper tones with nearly the same levels in the higher and highest frequencies with K77 Just  loook at drawing that roughly describes their relative response with K77

Using it is more convenient than the K77 I can use them for more time than any other  headphone without  tiring the heads the ears!