Notice : I would prefer anyone passing thru here instead of just watching this article and leaving this page to : send his opinions to my email at zliangas  at yahoo dot com  or just leaving his comments in the bottom of this page

Your replies are extremely useful to me. Please stop being mute !! thank you!

The music projects are now twop

[II]  the newer project is just 10 minutes of length and he requires also to add intro [program ID ] and outro[listener communication]  , thereby shrinking the music time. This seems to me quite difficult nt to calling it as bad to killing some music time in so short time for adding possibly useless info

I already used the Audacity program for some exercise. It is ok as  program for making some music effects or making audio and gear tests Any  regular follower of this site knows that with the screenshots used here. the program is very good for this work> worked also with some short mixing but i m quite experienced with it in more complicated works  as this and with fadeouts and 'dukings' or voiceovers
I also have a very old cool edit version but works only with PCM WAV Files so no reason ti use it.

i finally checked an bought Mixpad from a company i knew before using Debut [video-grabber] and videopad [video processing] MIxpad is a very complicated program but very easy to use after some usage with many effects and VST plug in add-ons  that i m not interested , at least till now

Here i will show you with graphical way the strategies we done so far and asking others if they can help  for any other  available :

METHOD ONE : fading the last song of the program

this is a example used from the Project II

This is the first way he did  which i followed in some of my music projects : using the whole song files removing some repetition parts and then fading out what exceeds the time barrier with some fade-out. By chance i use around of 5-10 secs for f/o . I rarely used this idea before is now my norm of gaining more time for adding a more song in the listing

I have an important question to ask : what is the best time to end a program by fading out the last song?

METHOD 2 : shrinking the file to fit the time

Above is the result in Audacity in a more recent job. I added the program intro in the start  that is just 6 seconds. The total time with that was  606 seconds  that needed some shrinking  to 600.  Just 1% shrinking. This is a very rare case of doing that and the first time for more pro work .

The person in charge used it also on the project [I ] but shrinking the file up to 3% down which as he mentioned is the highest level without making the voices 'duck sounded' . Mixpad has also box not to alter the pitch  as it can be shown in the picture below 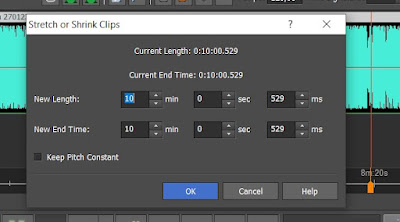 i m also open to discussions if any higher levels of shrinking /streching as 4-5% can do the job:

and here is the 3rd method of what i can think : Putting the start first file on the very start of the program and the finals' end on the end while putting the second in the middle and tilting it to fit better to the program. All remain file ends are variable.

This is the method i use for the project II. Ιn just 10 minutes of program to include 2-3 songs. The question also lies that  these songs are at least 4.5 minutes long, therefore I must remove more than the necessary.. 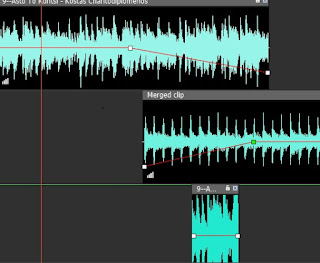 an here is another interesting picture on mixing two songs and later adding the file ID as shown wirth the short waveform  in the third row . You can also see on how the reed lines can affect the volume level by making a manual crossfade. This mini s/shot is a just simulation of the real project just for illustration as i didn't saved that the i did. Any saved project can cause more an 700MB of lowering the little SSD  memory that is now 67 GB only 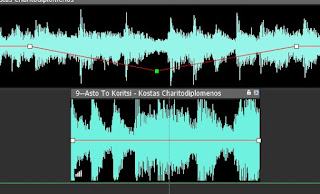 I asked also these 3 strategies to the curator together with some  pictures to illustrate better the situation for asking any better ideas of mixing files.

Unfortunately the person in charge [curator]  didn't help so much but just advised me why i don't use the other program (wavepad) by just joining  the files as i did so far . Quite opinionated reply as his wavepad program worked perfectly in his PC I  downloaded  and a tested the program quite much to the level that i wasa enforced to also buy it. I dont know which version he uses but mine  17.02 shown many problems in its operation:

Unknown reason effected the playback with popping sounds after the first minute if  jumping the mouse. if I leave it play  the file in full noting happens.  The problem resolved after playing with the audio input settings.

(1) it's a very hungry HD memory. After cleaning 250 MB files at 32kbs from parts if noise  , 6 hours of radio recordings my SD disk lost 25 GB of data with  system memory of 45 free GB left only. It happened also to another in the forum.

(2)  Once joining 5 audio files found some leftover sounds from the previous file ie remainders  of the 1 st were head as background into  the 2nd file  . I  returned to previously used software  (Xrecode and MPjoiner)

(3)Lossless MP3 operations are ok but  splitting files cannot cut  in their original bit chunks This is the program  i used some any years ago to cut albums ripped by me or  downloaded from in youtube.. older times

The NCH personnel was quite gentle with these problems and after several messages they sent me a patch program that tracks all my movements in order to identify any problem happened ..  for more than 9 days with the NY holidays in between nothing has been found but the load of checking was not heavy as before !

Also to notice the newer version solves most of the problems.

There are some  less important problems rising between Mixpad and Wavepad especially with the normalization levels. While Mixpad sets the EBU and remain normalization levels to -23db LUFS the resulting level with file imported to mixpad shows a maximum -6db . Still there are cases with all songs set to -23 to result with up to 1.5 db higher depending to the sound density if I m correct

Notice again  : I would prefer anyone passing thru here instead of just watching and leaving this page to  send his opinions to my email at zliangas  at yahoo dot com  or just leaving his comments in the bottom of this page

Your replies are extremely useful to me. Please stop being mute !! thank you!
Αναρτήθηκε από Zach Liang στις 8:01 π.μ.