These days a fend from the past called me of proposing a free program he uses for mixing songs in a dedicated computer. this was the result of oa discussion a few days before   when I referred him about the the programs i do music processing and hosting and proposed me to tsest the program YouDJ a very free DJ program. There was a very intensive reference also to the past times when we worked in the same place and the experimentation with the programs of the early 2ks that is with the PCDJ a legendary program of that time

This is trhe program he proposed me. I immediately visited the developers page and tested a bit tihs program. Its very interesting that this guy no only offers this spogram in free but also has a few educational videos in Youtube on its operational and how to DJ dn hwo to gain more pooints towards to get a higher degree in DIing into 3 steps 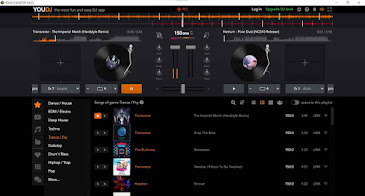 The consumes around 400 MB quite big for my tiny free SSD memory that now reaches the 59GB. THis is also a reason that i didn't want to keep it in my system. Checking inside the program folder there is a huge 250MB file that isi can part of its operation. Don't remove it as the program   cant operate!

In the menu there are also a  few samples that can intervene in the music program with some minor effect. For more effects a registration is required.

As i tested it only supports Mp3 BY bye the other formats.There is a virtual button for autoplay operation

Youtube videos are also supported but all mixing operations are disactivated.Here is a example. As in the photo you can see in the top row two videos are marked with  color bars. These marks cover part of the video thumbnail in the left or right that identifies in which of the two  virtual disks are played

This screenshot comes from its online version. as noticed by the developer Firefox does not support it fully but there is a Chrome plugin and supports Safari.

In short I deem that this program does everything a amateur and possibly a professional  Dj can need  (step 3 prorgram at very low pfoice 24 EU ). Very big installation file but it lacks support of any other format but MP3If he could remove all these uninteresting huge music collection , Still unusure for that as ll media stopped using MP3 format. 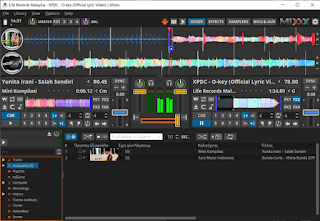 This is the alternative solution to the above and still a free program since its... inception . I already had some minor information in various fora about its operation a few months ago and very recently decided to test it. this program was the only lightweight comparing to other commercial programs found  in the net (Virtual DJ, DJUCed, and ultramixer ) and cost more than 100Eu . in the start i checked a few older versions  but finally stopped in the recent edition a relatively large installation file (75MB) This program has the same preferences dialog in all versions but  was quirt slow to understand audio piping Available in all platforms supports all file types except WMA... This is my main file format in saving the non Greek music I do that to conserve space in both computer and mp3player. this rather big player supports much better WMA than MP4 or AAC formats.

There are many useful operations with up to 4 live effects, 4 decks  , 8 cue points max  and around 16 samplers 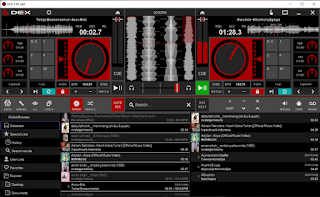 This is one  of  my most beloved programs of the far past ie early 2ks when many folks used it , not only the pros as far as i remember.

The above version DEX3 RE is the basic and quite simplistic among the remain . It  includes most important features   on very basic DJing  including the auto DJing and costs around 25 Eu All bigger start from 140

The program starts - at least to me - requiring a valid music library in every session. I prefer top add the songs later by using different directories. The are 8 effects available in caroussel. namely flanger,echo autopan LPcutoff reverb betwaw BASic Playlist can be filtered int standard music songs , karaoke and lyrics and with preview option in he auto DJ pane

The windows can also be stretched stretching everything inside  into smaller form , If ou are using windows tablet the program can also change into touch screen in a even more simple operation As with the remain programs it has the ability to randomize or shuffle the listing . The auto Dj is put into the right pane and can be just made with a drag of the listing .

The only minus is the lack of master volume. 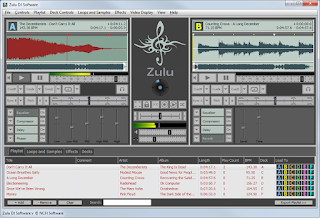 And finally  another program from NCH company . as i can tested it the program is very minimalistic with very few options regarding to the remain programs tested but at relatively high price for its abilities. Good that this program also uses the effects plugin database (filters, effects  VST DIrectX etc ) from the remain company;s audio programs to enhance its abilities these are more than 55 effects As far as i tested with mixpad and wavepad there are only around 15 VSTs supported and are automatically downloaded form the company's site There is along list of samples available to nearly all sound programs of the company.

The disc dragging is possibly the only  operation not supported

On of its most important features is the very big list of audio formats supported including the obsolete realaudio RA of pre20s time ! As with other products it can also upload these recordings to Dropbox SoundCloud and also Youtube with spectranalysis

Also to notice that all above programs can record the mixing and post to well known sites and stream the context,.  Mixx saves the files into WAV AIFF FLAC    and also ΟGG MP3 AAC and HE-AAC/2 [not all AAC modes supported] and other formats while PCDJ only to WAV and AIFF modes

Interesting is with external support to Bluetooth  products. Mixx does not support BT gear while PCDJ is OK but under first playing with standard line outs : headphones or inner sound card

This is what MIxxx shows after changing to Awei Y120 mini speaker: invalid device

After this near in depth analysis I still prefer PCDJ even if there is something missing : Loss of master volume and many formats in saving. the hits of it are the wma mode playback and support of BT gear for audio transmission!